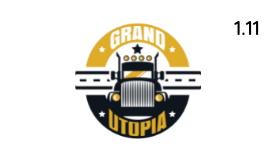 Without further ado, I announce that version 1.11 of Grand Utopia is now available! As usual, go here to update your version. Finally, the Iberia DLC is added to the list of mandatory DLC for the mod to work properly.

It's now time for a more detailed review of the content of this version. I'll also cover some other points to let you know about some changes.

I'll start with the most important information. As of this version 1.11, it is necessary to have the Iberia DLC for the mod to work. If you don't have this DLC, version 1.11 of Grand Utopia will not work. You will have to buy it or stay on version 1.10.

Meulan: This is the only town in the update. Located to the east of the Utopia port in the extension of the A6 motorway, Meulan was designed around a river that crosses it from north to south. Several districts are available, the town centre and its quays, a logistics zone to the south, a commercial zone to the west and another zone to the east on the hillside. The town also has two motorway junctions which will allow me to extend the road network to the south, north and west

Krautergersheim: This commune is a small seaside village and is located on the coastal road between Meulan and Utopia. You will find some narrow streets, typical of small French villages. Although its name is Alsatian in sound, the village has been built in a Mediterranean style due to the massive use, once again, of the new items from the Iberia DLC.

Maisnil-lès-Libercourt: Initially planned for the southern tip of the island, this village was finally built on the plains to the east of Port-Aelvinque. Here I tried to recreate the atmosphere of the small farming villages of our French provinces. Surrounded by fields, this village will be located on a future major departmental road that will eventually link the towns of Meulan and Grandville.

MODIFICATIONS AND REWORK OF SOME AREAS

This version also brings some new features to some of the zones already available. I am trying to improve some areas as I go along. The task being nevertheless colossal, everything can't be done at once.

Rebuilding the Utopia Bay Bridge: The Iberia DLC gave me a more suitable model for what is currently the largest structure in Grand Utopia. Formerly green in colour, the bridge is now a vibrant red. The model used is that of the 25th of April Bridge, located IRL in the city of Lisbon, Portugal. It is true that this bridge may remind you of the Golden Gate in San Francisco, and that is normal. Did you know that the company in charge of the construction of this Portuguese bridge was American? It is easy to understand the resemblance!

Reconstruction of the Lafalaise Bridge: This city is one of the 5 cities in version 1.0 of Grand Utopia. Therefore, the whole area in the centre of the map requires a reconstruction work that will be done little by little. The bridge I used at the time was not at all suitable for crossing such a deep crevasse. I had added pillars to the model I used, which, frankly, made the bridge look ugly. That's why I decided to change the design. The new one is an arch bridge. This type of bridge makes the area much more realistic.

Construction of a new road access to La Josefine: Everyone knows La Josefine for its difficult access. The current road was deliberately built to be difficult. However, this difficulty was not to everyone's taste and La Josefine was unfortunately neglected by some drivers, preferring to drive on tarmac. Wanting to make this village accessible to them, I extended the departmental road 16 to the isolated village (which is not so isolated any more). To do this, I opted for the construction of a road "flying over" the very uneven terrain of this island. Of course, the old road remains accessible for drivers addicted to difficult environments.

Finally, as usual, I have fixed the bugs and mapping errors that were reported to me. However, I wanted to warn you about a new bug that will appear because of SCS Software.

Bug on directional signs: With the release of ETS 2 version 1.41, SCS had the good idea to add a new font on the French signs. Even if their intention was good, it created a disruption on several dozens of signs used on Grand Utopia. I started hunting for the bugged panels and I was able to correct several of them but the work is titanic. I count on you to report me the location of the bugged panels, via the Contact tab of the website.

Lack of reverberation in the tunnels: Once again, SCS has decided to change the way reverb effects are handled. That's why there are no more of these effects on the map. I've started to read up on the new procedure but I haven't taken the time to do the necessary for this update. I am trying, without promise, to do it for version 1.12.

END OF CUSTOMISED DEPOTS AND LAND FOR SALE

This update was one of the densest in terms of land sold and therefore custom depots built. To sum up my decision, this is the first time I didn't enjoy doing this, probably because of the colossal overload of work it required. To be honest with you, v1.11 was ready to be released more than a month and a half ago. I didn't appreciate having to delay the release of the update for so long. I even had to reduce the number of new communes created (3 for this update against 6 usually for the other versions). That's why, after a long reflection, I decided to stop this counterpart to focus more on the most important thing, the creation of the map. Some will say that I should just do less but to be as sincere as possible, I don't feel like doing that anymore.
As a result, there will be no more new land available for sale from this version 1.11. Of course, for those who have ordered and paid for land in a city, rest assured that all orders will be honoured. To be more precise, I am talking about :
- those who have ordered and paid for land in a city that will only be available in a future version
- those who have bought a plot of land that is currently available and who still haven't given me the information, making it impossible to build for this version 1.11.
On the other hand, it is possible that some blue € icons are still present on the map. They are forgetful and they will not mean that a land is available. Do not hesitate to let me know about them via the contact form so that I can remove them as soon as possible.

I know that many people appreciated this counterpart and that this will disappoint many people but I am taking this decision to ensure a better development of the mod. Finally, I want to thank once again all those who helped me financially via their donation(s).

The end of customised deposits affects VTCs somewhat. Indeed, it will no longer be possible to set up your VTC on a custom deposit. However, the creation of new VTCs is still available and the good news is that I have finally learned how to create a fully independent company. Until now, VTCs have replaced existing SCS companies. That's why the number of VTCs per person was limited.
From now on, I am officially announcing that this limitation is lifted. It is therefore possible for one person to own several companies, different or belonging to the same group of companies.
Last but not least, the end of this limitation also allows me to revise the cost of a VTC downwards since the limited effect is no longer relevant. The new rate will be communicated soon in an article dedicated to the functioning of the new VTC system.

To finish this article, and mainly to give you the information, I will have to update the website. The platform I'm using has told me that the theme I'm currently using will no longer be kept up to date and that I need to replace it with a new theme. These changes will be made in the coming weeks.

I wish you all excellent hours of play on Grand Utopia, have a good trip!